Why Is It Important For My Audi To Have A Tuned Suspension?

German model cars have a well-deserved reputation for being road wonders. Their ability to handle all kinds of highways and maneuver with the grace of an antelope makes them treasures for the owner. An Audi is one such product of Germany. It has earned a well-deserved reputation for handling capability over the years. A tuned suspension is essential for this car to operate at maximum efficiency.

It is the Ride that Matters

An Audi in peak condition will ride like a cloud on a spring breeze. It will be able to maneuver through turns and handle straight ways on the road without anything to disrupt the driving pleasure of the owner. This is the kind of performance that a person is willing to spend tens of thousands of dollars to have. The suspension helps assure that sweet ride. Ignoring the suspension for a period of time can do more than just make the right a little bumpier. Poor suspension has a very adverse effect on the tires. The bouncing up and down can create irregular wear and tear. That is in addition to the problems an ill functioning suspension system can cause to other systems under the hood. To put it very directly, the suspension of an Audi needs to be tuned because the system has an impact on the car. If it is not working properly, the suspension can cut years off the life of the Audi.

The suspension system consists of springs, shock absorber, the stabilizer bar, and linkages connecting the Audi to the wheels of the car. Each plays a part in seeing to it that an Audi lives up to its reputation as being a gentle and smooth ride. The work can be done at a dealership, but if the owner has expertise in Audi maintenance he or she can actually do the job. The tuning of the suspension may not be as dramatic as it sounds. Parts such as the shocks will wear out with time, but if the Audi is not driven extensively there may not be a need for any major work on the suspension. A lot of driving with turns and stops will stress the suspension system to the point of malfunctioning. 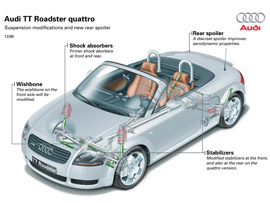 There are owners of Audis who will alter their suspension systems so that the car is physically close to the road. This does have the advantage of not having as much air going underneath the car and it can provide some better traction. A major problem that can arise is the suspension can coming into contact with other systems of the vehicle and causing damage. In these cases tuning may be needed to readjust the suspension so it’s a little bit higher. If an owner insists on having a lowered suspension it is going to be extremely important to have excellent shock absorbers. The tuning that requires replacement of worn out parts should make use of original equipment manufacturers (OEM) parts. These are parts of higher quality than the aftermarket variety. Because of the possible problems of a lowered suspension it is better to pay a little extra for more durable parts.

The use of OEM parts can also make it better to have suspension tuning done at a dealership. These carry OEM products and the mechanics have better experience with working on an Audi suspension system. There is also the possibility of a warranty on the dealer supply of OEM items. In any event, tuning the suspension system as a do-it-yourself project has certain risks that an owner may want to avoid.

When it is all said and done, having a tuned suspension on the Audi produces several very important benefits:

That last point really does make tuning suspension all worthwhile. Yes, there is concern about the rest of the car but the performance is the reason why a person spends hard-earned money on this beautiful vehicle. Maintaining a tuned suspension allows the dream to keep writing on the highways, keeping the right traction to the road and allowing for the great handling an Audi is known to have.